Alvin Grancell at 101: An Appreciation

28 May Alvin Grancell at 101: An Appreciation 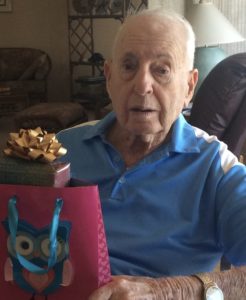 How many of us can point to a life’s achievement, a distinct accomplishment that has really made a difference? Our friend, Alvin Grancell, who turns 101 this week (and is still going strong) certainly can.

Alvin was there at the birth of the Pulmonary Education and Research Foundation (PERF). That was in the 1980s and Alvin has been a key member of the Foundation ever since, serving as Vice President of the Foundation for all that time. His involvement grew out of his wife Mary’s engagement with Mary Burns’ pulmonary rehabilitation program. He saw how much his wife’s COPD symptoms were improved when dedicated rehabilitation professionals work collaboratively with patients, but that this therapy was available to so few. He decided to make improving this situation a major life’s focus.

Alvin has been a key contributor both of money and of ideas. His vision has guided PERF’s: promote practical projects that can benefit people suffering from COPD and other respiratory diseases. Alvin’s contributions have been anything but passive.  He’s chosen to prioritize support of the people who will make a difference in tackling the tough problems that patient’s face. As a result, a small army of research scientists has been trained. For almost a generation, trainees and young investigators have had their research supported by Alvin’s generosity. For this, we salute you!

Despite the obvious impact of COVID-19 on the progression of new research developments in COPD, there’s plenty to look forward…

Developments with COVID-19 continue to be rapid and often unexpected. Some regions in the world that had originally been successful…