A New Hope for COPD? 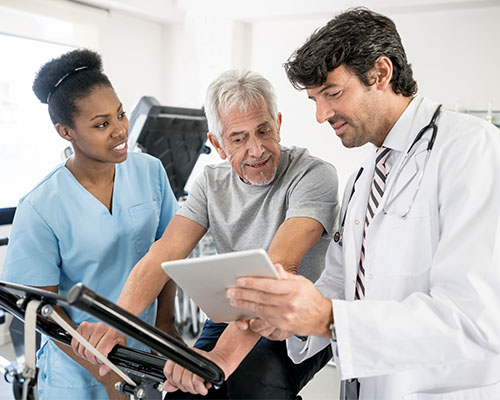 In 2007, the National Institute of Health’s National Heart, Lung, and Blood Institute funded a research study called The COPD Genetic Epidemiology (COPDGene®). The largest study of its kind in the world, COPDGene® has followed over 10,000 smokers for 10 years. Much of this research has been undertaken in your own backyard, under the directorship of Dr. Casaburi at The Lundquist Institute for Biomedical Innovation at Harbor-UCLA Medical Center (formerly called LA BioMed). Indeed, many PEP Pioneers volunteered as subjects for this important study.

A Special Issue of the Journal of the COPD Foundation sees three new reports that instill new hope for COPD patients. Primary care physicians and pulmonary specialists are often confronted by individuals whose lung function appears normal but complain of breathing difficulty. One article with over 100 authors (including Dr. Casaburi and his team) reports that, even in the absence of changes in lung function, symptoms and changes in lung structures observable on CT imaging should not be ignored! These conditions might become termed “pre-COPD”, in much the same way that the phrase “pre-diabetes” has been coined to describe patients who do not yet meet the diagnostic criteria for diabetes. Patients with symptoms or CT findings have increased risk for advancing to COPD, as well as increased risk of hospitalization and mortality. This research finding provides physicians with new evidence upon which to base therapeutic and diagnostic recommendations.

Although there are limitations to this work (for example, that all the participants were smokers, whereas as many as 25% of COPD patients may have never smoked), the research suggests new information about COPD subtypes that we did not previously know. It is unacceptable that over the last 15 years only 1 drug of a new class has been approved for COPD. This research identifies new characteristics of possible and probable COPD that can help to drive the search for new drugs at an earlier stage of disease. It is likewise unacceptable that pulmonary rehabilitation, a remarkably effective therapy, is rarely available, under reimbursed and tragically underutilized. This research begs the question whether disease progression in patients with pre-COPD could be slowed by providing access to this incredible therapy.

In their editorial, the COPD Foundation express their frustration that despite COPD’s global impact (300 million people world-wide have COPD), COPD continues to receive only a fraction of the research funding provided to other major chronic diseases. Research, such as the COPDGene® study, is the engine that powers medical progress. An essential part of the ability to make these ground breaking discoveries is patient participation in research!

The Rehabilitation Clinical Trials Center at The Lundquist Institute is a world leader in COPD research and needs your support. If you have a history of smoking or symptoms of shortness of breath, please consider participating in their research registry by calling (310) 222-8200 and making an appointment for a lung function test and health screen. You even receive $35 reimbursement for your participation! And your efforts could help shape the future of lung health.

COPD Genetic Testing: Should You Get Tested?

So you’ve been told that you have Chronic Obstructive Pulmonary Disease (COPD). Is it important for you to get genetic…

Most of us take breathing for granted. The process is mainly involuntary and occurs without us having to think about…